Officina Meccanica Begali was founded in 1954 and has been manufacturing electromechanical precision components since 1960.

Their line of fine keys and paddles for the ham community are a more recent addition.

They are a result of Piero’s desire to create the finest keys and paddles for his own use.

Piero obtained his ham radio license as I2RTF in 1964.

Ever since he has been a dedicated CW operator, and it was only natural that one day he would try to design and produce the best Morse keys that money can buy .

Now Piero has once again push his limits, designing and producing a very special limited edition paddles key expecially to commemorate the 17th edition of the International EME Conference.

It is called “Moon”, and it is a state of the art magnetic key, entirely built of high grade stainless steel, with solid silver contacts, and carbon fiber finger paddles. It has a custom made laser engraving with a year 1685 moon map on it. 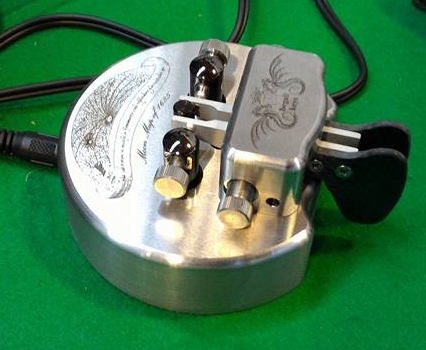 Price for this Limited Ed. work of art will be 520 Euro.